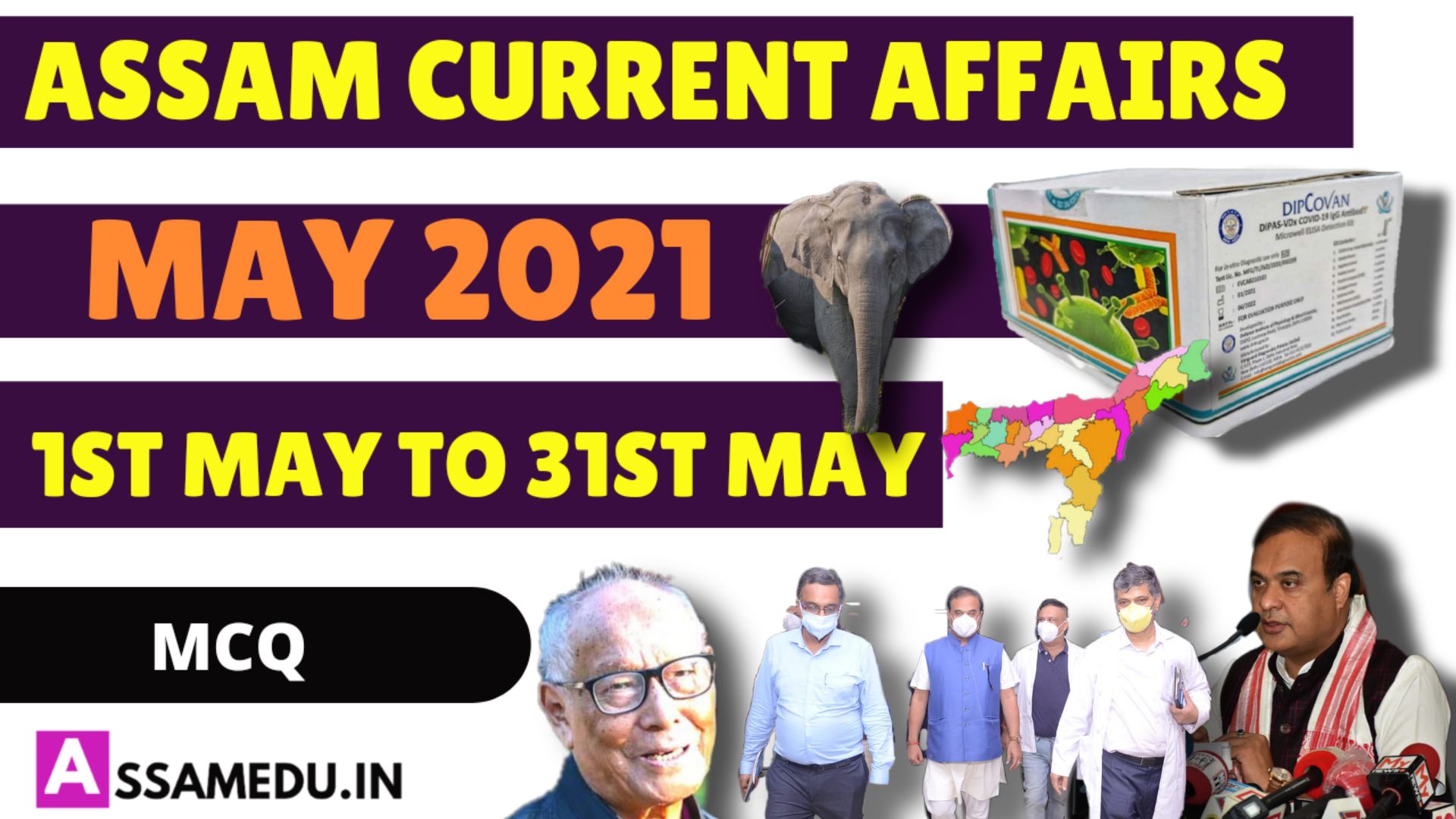 1) A real time Digital Flood Reporting and Information Management System (FRIMS) has been launched in which state?

2) DCGI has approved the emergency use of anti-COVID drug developed by DRDO. What is the name of this drug?

3) Who among the following is the Assam’s First female finance minister ?

4) Which Indian Pharma company has rolled out Russia’s Covid-19 vaccine Sputnik
V in the domestic market?

5) Who among the following elected as the 15th Chief minister of Assam?

6) who among the following appointed as the principal press secretary of Assam?

7) The Drugs Controller General of India (DCGI) has approved Phase 2 and 3 clinical trial of which covid vaccine in the age group of 2 to 18 years?

8) Kundoli Proposed Reserve Forest, where 18 elephants have recent died, is situated in which state?
[A] Karnataka
[B] Himachal Pradesh
[C] Assam
[D] Kerala

9) Who among the following is elected as the member of Badminton World Federation ?

10) Which one of the following is the highest ever investment by Govt of Assam in any PSU ?

11) Rupsi Airport  built under RCS-UDAN scheme will start its operation from 8th May. The airport is located in which state?

12) Which Ministry is associated with the new Social Media Rules notified in 2021?

13) IMD recently has infomed about the formation of new cyclonic storm, named Cyclone Yaas in Bay of Bengal. Which country has given the name Yaas?

14) Homen Borgohain, who recently passed away, was an award-winning writer & journalist of which state?

15) Which institution has set up a dedicated portal – CovAid, to track aid coming from individual organisations?

16) Who has been appointed as the new Director of the Central Bureau of Investigation?

17) Name of cyclone which recently devasted the coastal area of odisha and West Bengal ?

18) Which state has launched the MHIM Mobile App for home isolation patients?

19) Which of the following act is covered under the elements of Directive Principle?

(A) Ban on the slaughter of cow, calves, and other milch and drought cattle.
(B) All citizens have the right to get equal opportunities for livelihood.
(C) Equal pay for equal work for men and women.
(D) All of the above

All of the above

20) Which state has proposed to control microfinance, by way of a state legislation?

21) DIPCOVAN, is an antibody detection-based kit developed by which organisation?

23) Who among the following crosses 1 Million followers mark on twitter and become 1st assamese to do so?

24) Which of the following places recently added to the World Heritage site list ?

25) Which IIT Institution has developed a smart window material for automatic climate control of buildings?

26) Vesak, the Day of the Full Moon in the month of May, is the sacred day of which religion?

27) What is the name of the operation launched by the Indian Armed Force, to tackle Covid-19 pandemic?

28) Indian Council of Medical Research (ICMR) has dropped which among the following from the recommended treatment guidelines for COVID-19?

29) A new species of dinosaur called the Talkative Dinosaur was recently discovered in which country?

30) Who is the only Indian to made it to the list of Fortune’s list of the world’s 50 greatest leaders?